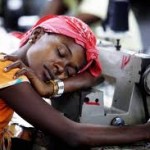 (2003) – From a political and moral perspective, the US-led war against Iraq was an unjust war. While military force against a brutal tyrant like Saddam Hussain may be justified, it should always be a last resort, after all diplomatic means have been exercised. Moreover, if such a military action is finally undertaken, it should be led by a world body, such as a reformed UN, or a World Militia under the auspices of a World Government. This time, however, it was led by a superpower with vested economic, political, and religious interests in the Middle East region.

The current global political and economic climate is imbalanced and unstable. Western democracies, while philosophically guided by the principles of modernism (equality, fraternity, and liberty) are often not emphasizing the same principles when global economic policies are drafted.

More precisely, the globalization forces promote political democracy while often using undemocratic means when dictating economic policies. Driven by the profit-hungry forces of neo-liberalism, or economic globalization, policies set in the West–through institutions such as the World Bank and the International Monetary Fund (IMF)–have often bypassed local democratic institutions and proven to be economically counter-productive and devastating to the so-called developing nations. “Theirs is not an ideology of freedom and democracy,” writes William Finnegan in Harper’s magazine. “It is a system of control. It is an economics of empire.”

Even in countries with a tradition of political democracy, such as in South East Asia, and in South America, the neo-liberal policies have often been economically disastrous. Argentina, for example–for a long time the poster-child of economic globalization–is today suffering the worst economic crisis in its history. In short, economic democracy is still a far cry for most developing nations. Indeed, economic democracy is also only a dream for millions of poor in the rich Western nations.

As PROUT founder P. R. Sarkar writes, economic democracy is the “birthright of every individual.” To achieve economic democracy–or what author and PROUT activist Dada Maheshvarananda calls “a dynamic economy of the people, by the people and for the people”– economic power must be vested in the hands of local people, not foreign corporate interests.

The Fist of Free Trad

Economic liberalization has now reached all corners of the world, but has yet to take hold in the Middle East. In the days leading up to the Iraq war, President George Bush drew several rather surprising links between the need for free trade liberalizations and a “free Iraq.” Here is a quote from a National Press Conference:

“I appreciate societies in which people can express their opinion. That society — free speech stands in stark contrast to Iraq. Secondly, I’ve seen all kinds of protests since I’ve been the President. I remember the protests against trade. A lot of people didn’t feel like free trade was good for the world. I completely disagree. I think free trade is good for both wealthy and impoverished nations. But that didn’t change my opinion about trade. As a matter of fact, I went to the Congress to get trade promotion authority out. “

No surprise then that free trade and the messianic vision of market fundamentalism was an important part of The National Security Strategy of the United States, issued by the White House in September 2002. “We will actively work to bring the hope of democracy, development, free markets, and free trade to every corner of the world,” the Strategy claims. “The possibility that the Marines and high altitude bombers might need to be involved in spreading the good news about free trade does not, in context, seem far-fetched,” writes Finnegan.

No, it does not seem far-fetched. As New York Times columnists and economic globalization advocate Tom Friedman wrote in his book, The Lexus and the Olive Tree: “The hidden hand of the market will never work without a hidden fist. McDonald’s cannot flourish without McDonnell Douglas… And the hidden fist that keeps the world safe for Silicon Valley’s technologies to flourish is called the U.S. Army, Air Force, Navy, and Marine Corps.” In other words, the war against Iraq was more about fostering the freedom to make a profit on hamburgers than about finding WMD’s. It was more about McWorld vs. Jihad than it was about Bush vs. Saddam.

Free trade and corporate globalization–whichever way it is implemented–has not, however, been a boon for the world’s developing countries. While the US and Europe has increased its wealth, most people in developing nations have become poorer. Indeed, even the IMF recently reported that their policies have failed in lifting these countries out of poverty. Even in the US, globalization has had negative effects on peoples income. Real wages have fallen 4 percent since 1973, while economic growth has averaged 3 percent. In contrast, during the decades prior to globalization–between 1947 and 1973–economic growth averaged 4 percent and wages increased by 63 percent. So, why should Iraq celebrate a future designed by the warriors and free traders in Washington?

Now that the high altitude bombers have finished their work in Iraq, and the US promises the “liberated” Iraqi people that they will soon bask in the glory of democracy, this promise does of course not include the promise of economic democracy. For free market fundamentalism and real-life economic democracy are not mutually inclusive. Just ask the people of Bolivia. Although rich in natural resources, it is the poorest country in South America. Why? Most of the resources are utilized by foreign corporations. “The World Bank is the government of Bolivia,” a Bolivian newspaper editor claims. So, how can the US promise Iraq what the Washington strategists cannot even provide millions of its own citizens, not to speak of the impoverished people in the third world?

A “free Iraq” must therefore not only mean the political freedom to vote, but also freedom from poverty, and the freedom to choose the path of economic self-sufficiency. A truly liberated people should be able to exercise both political and economic democracy. Most of all they should feel secure that no foreign economic power can dictate their economic future–that they are not victims of the “dictatorship” of foreign economic powers.

There are many stated and unstated reasons behind the US-led coalition’s war against Iraq. Most of those reasons–to protect US national self-interest, to prevent future attacks by Iraq and other terrorists, to stop the proliferation of the not-yet-proven Iraqi weapons of mass destruction, to ensure US geopolitical control of the Middle East, and to ensure trade liberalization in the region–do not meet the high moral aim of simply liberating the Iraqi people from an unjust tyranny.

The economic sanctions will soon be lifted so that Iraq, and thus the whole Middle East, can open up for the commercial and cultural hegemony of Western corporations. Aid will also be flowing in. And with this aid, for the hungry and painful bodies of Iraq, will also come aid for their souls. The Messianic message of Billy Graham, his son, and many other Christian evangelical preachers will soon be heard all over the dusty towns of this ancient, Muslim country. For, as there is a holy alliance between McDonald’s and McDonnel Douglas, there is also a holy alliance between US-born capitalism and Born Again Christians, between fundamentalist Christendom and fundamentalist economics.

As the civilizational and economic conflict between the North and the South, between the rich and the poor, increases, there will be a growing need for both a World Government and for economic democracy. The people of the world will soon be tired of the US operating as the World’s Cop. There will thus be demands for a world authority governing from a higher moral ground than both the UN and, especially, the US is currently operating on. In the words of philosopher Ken Wilber:

“This would mean, for example,” writes Wilber, “that America is allowed to despise Iraq (in the privacy of its own…national, cultural space). America is not, however, allowed to attack Iraq.”

What are some of the benefits of a World Federation or World Government? Sarkar suggests four main benefits:

While Wilber has been primarily preoccupied with blueprinting the cultural and political landscape fostering a more benign world, Sarkar has also mapped its economic aspects. Sarkar believed that political democracy cannot fulfill all “the hopes and aspirations of people or provide the basis for constructing a strong and healthy human society. For this the only solution is to establish economic democracy.”

According to Sarkar, the following guidelines are needed to establish economic democracy:

Paul Hawken, an author whose writings and talks envisions a world of economic democracy, cultural vitality and ecological sustainability, was recently asked by a journalist: “Aren’t you just dreaming?” He replied: “Absolutely I’m dreaming; somebody’s got to dream in America.” Indeed, somebody’s got to dream of a better future, and not just in America, in all countries of the world.