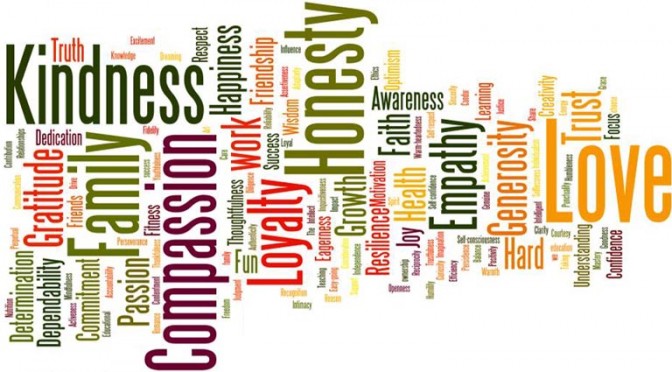 What would be the value-building blocks of a society where 100% – and not only the 1% – flourish and progress in all possible ways?

“The synthesis of self-realization and service provides a sound base for progress and dynamism.”

Today most of us live in a capitalist world where profits, concentration of wealth in the hands of a few, and self-interest are the standards. But it was not always like that. Throughout history, essential values have differed from one form of society to another. The characteristic values of any society inform us about the principles and qualities considered worthwhile, desirable, and basic by that society and its people.

Intellectually- and spiritually advanced societies, on the other hand, revered subtle minds and did not hold physical strength to be a most essential value. The lofty values of enlightenment societies included philosophical and religious merit, inventiveness, profundity, and the power to communicate subtler realities in general, typically generating considerable academic acumen along with sophisticated culture. All developed civilizations of the world went through such stages of brilliant human individual and collective development.

The legacies of those warrior- and intellectually- minded societies are still with us today.  In fact, a speciality of the system of capitalism is that it commercializes the human and structural resources developed and emphasized by preceding forms of civilization and society.

Examples of such commercialization are innumerable, such as the modern evolution of the Olympics. The original Olympic Games of ancient Greece celebrated the universality of physical sports. Only a few decades ago, participants would be banned from participation if it were known that they had made any amount of money from their sport. Today’s thoroughly commercialized Olympics present us with a very different picture.

Actually, the Olympics were not commercialized for sports reasons but because those with economic interests smelled profits. Today it is safe to conclude that much of the natural sports world is being destroyed by frenzied commercialization. Endemic doping and increasing financial costs involved in participating even at the child entry level are only two of the symptoms of capitalism’s hijacking of our natural sports world.

Another symptom is that the universality of our sports has been lost. If you don’t pay, you are not allowed to participate and you cannot even watch, depending on broadcasting rights, etc. In fact, the most obvious remaining feature of the antique world we see in today’s sports world is that human beings are purchased and sold like horses on the open market.

While looking for values that would sustain a society for all, and not only for the one per cent, here are a few practical examples. Let us start with the role of an everyday enterprise.

Under capitalism, the purpose of any company, fundamentally, is to increase value for its shareholders. Like any principle this one, has its particular dynamics. One of those dynamics is that owners increasingly or completely regard employees of their own company as a cost factor and not as human beings and part of the enterprise. Outsourcing, capital flight, and rampant unemployment, where there was none previously, are symptoms of this dynamic.

Such selfish owners might identify their employees as customers or complete strangers who are welcome at certain times but not at others. Some have even labelled such type of owners as mad and psychopaths, who do not regard, in most concrete terms, another human being as fellow humans.

The basic self-centeredness of profit-hungry shareholder companies estranges their owners from the rest of the living world. They tend to live and work inside a speculative bubble while everybody else is kept outside of that privileged exclusive domain.

Such an all-out exploitative system is clearly not sustainable. On this little planet of ours both the source of physical wealth and human needs remain the same. Irrespective of this hard fact, capitalism continues to concentrate wealth in the hands of a dwindling number of super rich big owners of the world. Capitalism is certainly short-sighted. The logical result of its self-contradictory system is the destruction of either party – the exploited or the exploiters – or in the worst case both. In any of those scenarios capitalism will go down due to lack of fresh fodder.

One of the many serious consequences of the present level of economic self-interest is the increasing ecological and biological callousness that now threatens all life on our planet. Social and cultural degradation is another looming catastrophe resulting from capitalism’s insensitivity to real human needs.

The essential damaging factor of capitalism is egotism. Often identified as greed, the self-seeking personality of capitalism expresses itself in many other obnoxious forms, too, such as arrogance, insensitivity to the needs of others, the cancer of mental crudeness, existential isolation, etc.

Currently, this destructive core of the prevailing global system is experienced by all and sundry – exploiters and the exploited – in the form of collapsing family and societal structures, loneliness resulting in physical and mental discomfort, and mental, political and social diseases leading to corruption, crime, abuse, suicidal behaviour, and other impulsive, irrational behavioural patterns in individual and collective life.

In essence, these are all values issues. We have already seen that the value of selfishness is very much in conflict with human needs at large. Other large-scale experiments of importance to us here, such as communism in its various forms, proved once and for all that “economic equality” and “materialistic socialism” are values that are doomed, too.

What would be the alternative to capitalism and communism? On which values may we safely base our work for a better tomorrow for all?

The conflict between capitalism and communism has often been labelled as “individual freedom vs. collectivism.” Much of the victory of capitalism over communism seems to lie in the former’s concept of individual liberty. However, life teaches us that like any other element of human life, individual freedom needs to be balanced and integrated with collective considerations into a benevolent whole. Indeed, this truth of the need for a synthesis of individual and collective good is relevant to family life, social life, and planetary life.

The natural and most benign complement to an individual outlook is service-mindedness. The mutual influence of those two – self-realization and service – is most fertile and constructive for both individual and collective life.

The Progressive Utilization Theory (PROUT) deems that the good of the individual lies in the collective, and the good of the collective lies in the individual; hence both have to be developed to the maximum. It follows that profits, in order to serve common interests, should be subordinated to service. A company of tomorrow needs to be based on service firstly and economic profitability secondly.

What kind of socialism is this, you may ask. Well, “self-realization + service” really means for an enterprise that on principle its activities first and foremost should be of real use to people, and to all living beings, and to the environment, and to the entire world, directly or indirectly. A business venture should do real good deep down, and not only be of service to a few at the cost or loss of all others.

Only when a basic principle of “local and universal good” is established and drafted into the business plan, may we think of a company’s profitability. If, on the other hand, economic profitability is placed first, the nature of the benefit of such a company may be in serious doubt. Therefore, PROUT advocates “service first, profitability second” as far as business is concerned.

A basic service foundation will guarantee the sustenance and progress of all while maintaining ecological solidarity. Not only that, only sincere service-mindedness would guarantee a proper existential outlook. What does it mean to be a human being, how do real human beings progress, what are the ultimate human potentialities and goals? Such increasingly subtle considerations should be intrinsic to both the short- and long-term development plans of any enterprise and company.

In view of the current capitalist paradigm, some would perhaps ask whether it is at all possible to run companies  based on service-motivation primarily and only secondarily on profitability, as discussed above.

While PROUT presents a rich discussion on the topic of profits and profitability, covering many areas and practical issues, the following will serve to clarify certain fundamental issues and mechanisms in the development of an exploitation-free industry and world of trade. (All quotes from “Decentralized Economy 1”. In Proutist Economics, and in PROUT in a Nutshell Part 21, if not otherwise noted.)

“Production should be based on consumption, not profit. Most countries in the world have adopted economic systems, which are profit-oriented – that is, production is undertaken for profit. Producers give first preference to those items, which bring maximum profit, so everywhere there is keen competition regarding the production of the most profitable goods. India is no exception. To increase the standard of living of the people, a new system of production will have to be introduced. Consumption, not profit, should be the underlying motive in the field of production.”

“The sweetest unifying factors are love and sympathy for humanity. The wonts of the human heart are joy, pleasure and beatitude. In the physical realm the best expression of this human sweetness is the cooperative system. The cooperative system is the best representation of the sweet nectar of humanity.”
– P.R. Sarkar, “Cooperatives”. In Proutists Economics, and in PROUT in a Nutshell Part 14.

“The members of the cooperatives should decide the policies concerning such things as agricultural production, price fixation and the sale of agricultural commodities. Local people should not only control cooperative bodies, but supervise all activities related to the local economy. The local administration will have to assist the economic development of cooperatives. The price of agricultural commodities should be fixed on a rational basis by taking into account the price of commodities; the cost of labour, raw materials, transportation and storage; depreciation; sinking funds; etc. In addition, this price should include a rational profit of not more than fifteen per cent of the cost of production. In a decentralized economy agriculture will have the same status as industry.”

PROUT holds “Self-realization and Service to All” to be the requisite value base for another world; a world where everyone may flourish and progress. Moreover, PROUT presents a theory of the social cycle where the aforementioned values of various forms of human society continue to express their dominance in succession under the enduring imperative of self-realization and service. PROUT stands for human diversity in existential unity as far as all socio-economic, political and cultural areas of human life are concerned.

Trond Øverland is an editor of PROUT Globe.