PROUT suggests we exchange the idea of pervasive private ownership for stewardship and an absolute right to utilization. 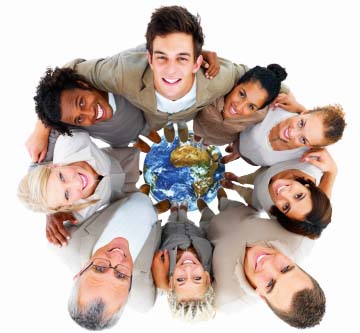 Trond Overland
Imagine a society where people run most things together. Utopian, you say? Well, it would not be so different from the way most of us share our daily homes, public transport and other commons, work places, social life, etc. Human beings already share utilities, properties, services, mentalities, culture, the spiritual, etc. The question is rather: How may we determine the ownership of wealth so that prosperity may be universally distributed?

Physical wealth is limited. The limitations, or boundaries of physical wealth such as a coin, a car, land, etc., enable us to appreciate it and relate it to other types of wealth. If physical wealth were boundless we would not have been able to conceive of its particular shape or form and that wealth would have remained abstract and meaningless to us. Only when we comprehend the boundaries, the limitations, of something accurately do we become able to enjoy and use it properly.

Socio-economically speaking, whenever the natural limitations of physical wealth are not accurately observed, its value begins to tend towards the abstract. The process thus started may render wealth useless. This is the case of monetary hyperinflation when prices skyrockets and money bills become worthless in the end. Another example of such lack of proportion is the presently over-heated speculative financial markets, where little or nothing relates to the real economy and lives of ordinary, productive people.

An effort to make something limited appear as unlimited will necessarily end in fiasco. For an economy to run well it is essential that it accurately observes the limitations of essentially correlated factors, such as:

If such crucial factors are not appreciated in the light of their natural limitations and boundaries, but instead are abstracted endlessly, it would result in imbalances, disparities and eventually lead to a systemic breakdown.

The limitations of physical wealth create a socio-economic reality where the disproportionate accumulation by one person results in poverty for others. This is a very real challenge to us all: physical wealth remain limited whereas human thirst is unlimited. On the human side our unlimited thirst will never remain satisfied by limited physical objects. On the social side there just isn’t enough physical wealth available even for one person’s unlimited thirst but there is enough of it to provide for us on our journey towards all-round fulfilment. Therefore, physical wealth cannot be the be-all and end-all of human life; there must be something more to life to satisfy us fully.

In the spiritual perspective no human being can claim sole ownership to wealth. The ultimate cause of whatever we choose to acquire during the short time we live here on Earth is beyond our understanding. Also, a time comes for all of us when we must leave everything behind in acceptance of the fact that our personal ownership is illusory. When we think deeply about our existence we simply have to surrender any personal ownership to the great mystery behind the unceasing creation that goes beyond our little lives.

These two basic truths – the limitations of physical wealth and the overriding great mystery of creation – make a powerful argument for the abolition of individual ownership in exchange for a universal right to utilization.

PROUT’s model of ownership is based broadly on the individual’s need to realise his or her potentialities as well as on society’s need to guarantee each and every one’s welfare and progress. The over-all emphasis is on coordinated cooperation and moving together. These needs are sheltered in Prout’s five fundamental principles.

PROUT’s three-tiered industrial structure allows for private ownership of small enterprises. When enterprises attain a certain volume, they would be run as cooperatives. Shares in cooperatives remain within the enterprise and cannot be traded outside of it.

Under PROUT the cooperative sector is by far the largest in volume. Cooperatives may be of wide range both terms of services and production and in terms of volume. The number of private sector ownerships may be numerous but their volumes will remain small. Public sector enterprises will be few in number and producing very large volumes of typically raw material. Only large and specialized enterprises would be owned by the state.

This system will eliminate confusion regarding whether or not a particular industry should be managed privately or by the governnment, and will avoid duplication between the government and private enterprise. The emphasis is on evolving an exploitation-free, consumption-motivated economy, and not on creating profit for profit’s sake.

PROUT proposes a phase-wise socialization of agricultural land through cooperatives. Cooperative land ownership should be implemented step by step in adjustment with the economic circumstances of that area. During this process, the ownership of land should not be in the hands of any particular individual or group. Further reading: Land ownership, agrarian revolution

Discussions on ownership tend to focus on private and public interests. It is therefore relevant here to reference PROUT’s policy on wages, salaries, etc. PROUT accords full freedom to individuals as far as input and output are concerned. Individuals who work hard will be able to earn more. Likewise, socially valuable initiatives and careers will be properly acknowledged and remunerated. Still, PROUT’s first fundamental principle, which enforces limitations on accumulation, will impact on areas of salaries and remuneration as well. As much as there will be a universal minimum salary for work, there will also be ceilings on progressive salary schemes.

Capitalism promotes the right of individuals to amass capital at liberty. The trend of capitalism is increased centralization of private wealth. This does not mean that wealth is being more widely distributed. The number of billionaires may be growing but the number of people who lose out in this race is growing very much more.

A very small number of people own most of the world’s riches. Around d the turn of the millenium, 10% of the US population owned 71% of the nation’s wealth and the top 1% owned 38%. The bottom 40% owned less than 1% (writes Peter Phillips in Censored 2007: The Top 25 Censored Stories).

And the figures are getting more dramatic. According to a Gallup report, from May 2009 to May 2011, daily consumer spending rose by 16 percent among Americans earning more than $90,000 a year; among all other Americans, spending was completely flat. This chart shows that wealth gap in the US around the time of the Great Depression is back today in even greater measures.

A shop needs customers with money to spend. The system of capitalism however keeps reducing the number of potential customers. The centralization of wealth results in recessions and depressions when the super rich no more want to invest in the bearish markets they themselves have created by their colossal accumulation. The attempts to feed fresh money into consumer markets (“quantitative easing”) in order to keep economies going only compound problems and will in time lead to stagflation.

In PROUT terminology, this compounding of problem by so-called solutions is a result of capitalism’s basic internal contradiction. Its perpetual accumulation and centralisation of limited physical wealth is ultimately self-destructive. The capitalist ownership model is unsustainable.

Materialist socialism suffers from a self-destructive internal contradiction too. Firstly, it promotes collective ownership in the form of state ownership. Private ownership is discouraged or made illegal. “From each according to his ability, to each according to his need,” remains an essential tenet of socialist socio-economic thinking. The weak link here is the second part of the sentence, “to each according to his need.” It allows for inertia and irresponsibility to set in. This was the case in communist countries where economies kept slowing down as too many people got used to depending passively on the state. The materialist socialist experiment of communism generated a highly centralized economic system – state capitalism – where almost all segments of public and economic management were under government control.

Czechoslovakia emerged as the most prosperous country in the Eastern Bloc. Although levels of consumption were well below those common in Western Europe, its inhabitants enjoyed a standard of living generally higher than that found in most other East European countries. Still, the Czech economy deteriorated under such strict controls. It was not until the Velvet Revolution of 1989 that the economy was liberated. (Sources: Wikipedia, Thomas White)

Nikolai Leonov, professor at the Moscow Institute of International Relations and former KGB general, has described the results of socialist economics: “First there was a visible decline in the rate of growth, then complete stagnation. There was a drawn-out, deepening, almost insurmountable crisis in agriculture. It was a frightening and truly terrifying sign of crisis. These factors were crucial in the transition to Perestroika.”

Socialist systems do not work because their workers do not work. “They pretend to pay us and we pretend to work,” Russian employees told visitors in the 1980s. Gregory Yavlinsky, Russian economist and advisor to Mikhail Gorbachev, became convinced of the need for reform when he investigated the low productivity in the Soviet mines. He found that the miners were not working because they had no incentives to work.

Secondly, materialism compounds the socialist socio-economic problems of inertia and irresponsibility. Materialism is the essential philosophy of worker-oriented socialism. The materialist approach to life places material pleasure above other life interests. Matter, however, is limited and therefore this attitude towards life tends to entrench the limitations of people’s mentality rather than expanding it. In the end this unfortunate development reaches a point where society’s collective psyche loses its flexibility. In the end the materialist state throws out all refined and subtler human sensibilities and depends only on brutality in order to stay in power.

The individual remains an essential source of inspiration in general and for generating fresh initiative and continued growth. Communism was unable to maintain socio-economic dynamics as it sacrificed the individual at the altar of the collectivist workers’ state. Banning individual interest is not in the interest of society and the economy. Wherever people lack reasonable scope for ownership and earning, economic and industrial output sinks. There must be a balance between the two.

As capitalism give much scope to enterprising individuals, it is a much more dynamic system than materialist socialism. However, the fundamental direction of capitalism is toward increased disparities. In the end, the centralisation of wealth under capitalism becomes unsustainable and leads to the final collapse of the system after rounds of heightened instability.

PROUT limits wealth accumulation and focuses on generating welfare for all through a careful adjustment of personal and collective interests. Individuals will have ample scope for earning and ownership. At the same time PROUT’s industrial set-up promotes cooperative, coordinated ownership structures as the mainstay of industrial and economic life. PROUT includes and balances the individual and the collective in the interest of all.