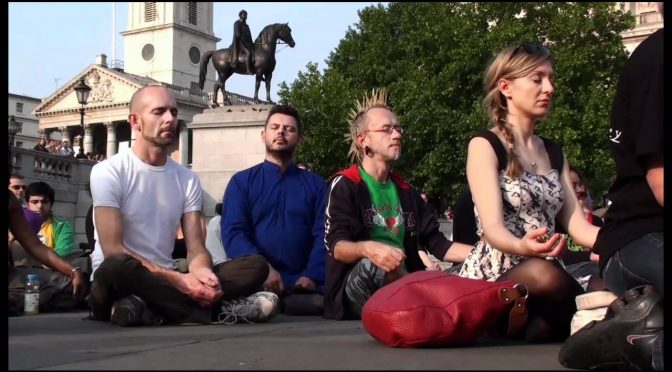 A current TV production of the Mahabharata* provides a particularly sweet scene. The more than a hundred young cousin brothers are messing about in the grounds by the Hastinapur palace. To be exact there are 102 of them, for the eldest of the Pandava brothers, Yuddhisthir, is seen sitting at the edge of the playground performing a yogic pranayama exercise accompanied by his two youngest brothers, Nakul and Sahadev. It is not immediately clear whether little Nakul and Sahadev actually prefer to sit quietly like that or are pining to join all the others in their boisterous play. The two remaining Pandavas, Bhim and Arjun, are not sitting still at all but are rather resolutely engaged in the extrovert pursuits of their Kaurava cousins.

From A to Z the Mahabharata is a tale of the importance of inner control over instinctive impulses and ambitions. It is the drama of our “eye of the hurricane” and the rest of our unruly, untempered, wild nature – the mind’s restlessness and hankering after pursuits of any kind. The Mahabharata is most of all the tale of the Supreme Reality and Highest Truth, embodied by Lord Krsna; that only the one who is really in touch with his or her own peaceful centre can achieve truly great things in life.

In the system of spiritual practices, adherence to moral principles, (Yama and Niyama), energy control (Pranayama), and yogic bodily exercises (Asanas) all combine to provide a required firm basis for beginners’ spiritual practices as well as preparing the body and mind for further higher pursuits. Among these, Asanas are renowned the world over as “yoga exercises” that may be practised for a number of health reasons. The recognised authority of Yoga, Maharsi Patanjali, however defined yogic postures as sthirasukhamásanam: proper exercises that develop calm equipoise.

The first word here is sthira, and the eldest Pandava brother was named Yuddhisthira – the one who remains calm even in war. Of the five Pandava brothers, Yuddhisthir is the very eye of the hurricane, the only one of all the 105 cousin brothers who remained properly calm and collected in any circumstances however trying. Yuddhisthir’s impact on his more restless brothers was such that the five Pandavas were never really defeated although being relentlessly humiliated, persecuted, cheated and in general brought on by the wily Kauravas. In the end, the restless, jealous, vainglorious, and power-hungry Kauravas utterly perished as they were wiped out in their own war by the righteous Pandavas who could go on to rule the world for the welfare of all.

Lord Krsna formulated the idea of the eye of the hurricane in human life in His own way:

In the Ananda Marga system of spiritual practices, asanas are not classified as “yoga” but as a vehicle to spiritual practices, much in the same way as Patainjali factored Asanas in as one of the eight limbs of his comprehensive Astaunga Yoga system. The founder of Ananda Marga, Shrii Shrii Anandamurti, grouped the 42 asanas exercises of the basic Ananda Marga system into two main groups: those that act mainly on the physical body, and those that act mainly on the mental mind.

Coming back to Lord Krsna’s definition above, the greatest importance and effect of kurmasana, the tortoise pose, is on the mind (although it is one of the hardest asanas to physically perform perfectly). Kurmasana makes the mind still and poised for deep meditation.

All the asanas of the basic Ananda Marga system in their own different ways go together to combine into personal programmes that aid practitioners at any point on their path and in any circumstances. Along with other factors such as selection of food, habits and general life style the practice of properly selected yogic asanas will contribute to a person’s healing, health and well-being in various ways. Primarily the role of asanas is to contribute towards a person’s existential stability, equipoise, and further spiritual pursuits. Shrii Shrii Anandamurti, opined:

“The actual meaning of the word ‘dama’ is self-control. The verbs ‘sham’ and ‘dam’ are almost synonymous in Sanskrit. The root verb ‘sham’ + suffix ‘kta’ = ‘shanta’. ‘Sham’ + ‘anat’ = ‘daman’. Damana means ‘control of oneself’ and shamana means ‘control of others’. A person who fights against the anti-social elements and controls them is said to be doing shamana, while one who controls oneself is said to be doing damana. Death controls the human beings and maintains a balance in this universe so death is called shamana. In common parlance, the mythological god of death is also called Shamana. One who practices self-control or prepares oneself to fight against injustice, or controls one's desire to harm others by the application of psychic force, is said to be practicing damana. A dhármik person must have the quality of damana.” [Taken from the discourse “The Ten Characteristics of a Dhármika”]

Patanjali explains more about asanas in his Sutra no. 47: Prayatnashaethilyánantasamápattibhyám. Here Patanjali applies the term ‘samapatti’ in a general way as an equivalent to Samadhi. Shrii Shrii Anandamurti, however, explains samapatti in a more differentiated way:

"The knowledge of the differentiation between átman (unit Cognitive Faculty) and buddhitattva (existential-I which results from mukhyá akliśt́ávrtti is called vivekakhyáti (viveka means discrimination; khyáti means ensconcement) or viśayaka samápatti (viśayaka means microcosmic object; samápatti means ultimate dissolution). When viveka khyáti or viśayaka saḿapatti become permanent it is called dharmamegha samádhi. To attain permanent viveka khyáti, vaerágya (spirit of total surrender) and abhyása (continuous practice) are indispensable. The meaning of vaerágya is not to colour the mind with the colour of finite objects but to develop an intense longing for the supreme spirituality. The meaning of abhyása is to regularly continue the same spirituo-psychic practice. The minds of non-sádhakas are extremely restless. There are changes in their thought waves at every moment; there are numerous curvatures in the waves of their cittas. Through abhyása, through prolonged and meticulous practice, one strives to make the citta flow with a particular wavelength permanently." [Taken from the discourse “Cognitive Force and Psychic Practice”]

The result of this is revealed in Patainjaili’s final Sutra no. 48: Tato dvandvánabhighátah. The idea of going beyond the ‘dvandva’ or dualities of reactions arising from the ego is a big part of the Bhagavad Gita. This is an essential task for anyone who takes up or participates in a righteous struggle. Shrii Shrii Anandamurti opined:

“It is not possible to fight against sin as long as there is some weakness in your mind. In this fight, your goal is not the sin or the sinner, your goal is the Supreme Consciousness. Anything that comes in the way of this has to be removed mercilessly. When clouds collect around the pole-star and cover it, your duty will be to remove the clouds and follow the pole-star without caring to see where the clouds have gone. If you always think of your enemy, your mind will adopt the bad qualities of your object of ideation, but if the Supreme Being is your goal, your mind will be metamorphosed into the Supreme Being itself.” [Taken from the discourse “Your Mission”]

As stated, the term yoga is well-known throughout the world by now. The esoteric lore and practical knowledge that was confined to India and a few other areas in Asia is being practised all over planet Earth today. One may travel to any country and one will find that asanas and spiritual sadhana are being practised there.

Whether yoga has outgrown Bharat (India) or the spirit of Bharat has grown and spread with yoga is anybody’s guess. The fact is that we are no longer living in the age of the Mahabharata but in the age of Mahavishva. In December 1967, at the time when asanas and meditation was propagated for the first time to the wider Western audience, the Marga Guru pointed this fact out in discourse given at the Ananda Marga central office at Ranchi:

“The guiding factor behind the creation of the Mahábhárata was dharma – the creation of a great human society in which there would be peace, happiness, fraternity and no poverty. In that period, it was the rule that the country was held responsible if a person died of starvation. Not merely this, if there was an early death, if a child of five or so died, people regarded it as a flaw in the ruling structure. Today you have to create Mahávishva, and the guiding principle behind it will be that all human beings are the progeny of the Supreme Progenitor. Hence all are His children, hence all should live together – nay, will have to live together. Black or white, literate or illiterate, small or tall, all are the children of the same Father. Hence all will have to live together.

“So the important thing is that all are the progeny of the Supreme Progenitor. According to this, there will be unity in the physical stratum, and so will there be in the psychic and spiritual strata. But to strengthen this unity yet more, there is one more factor which should be there, and is there – that factor being the common goal for all the children of the Supreme Father – the merger of all in Him. All have come from Him and are in Him; therefore, all people will have to live together.

“Remaining together is natural for you, and to remain disunited is something unnatural. You know well that unnaturality is not tolerated by Prakrti (the Force of Creation). Unnaturality is ultimately destroyed. So it is natural for human beings to live together and to make a great Universe. By not doing so, and by mutual fight, all will be destroyed. This is the law of Prakrti. Hence, united you will have to remain, this is your duty. So that the people of the world may remain united, it is your duty to bring the Mahavishva as soon as possible. There will be peace and happiness in the Universe, and, established in one indivisible ideology, humanity will march ahead toward the Supreme Goal. Victory be with you!” [From the discourse “Planning for the Mahávishva”]

* The Mahabharata is an ancient Indian epic depicting the clash between righteous and unrighteous forces.