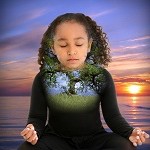 Gary Coyle
The sentimental appeal of neohumanism derives from the deepest recesses of the human personality, that vast reservoir of largely untapped spiritual inspiration. Contemporary society exhibits many sentiments, which fall short of neohumanism. Sarkar has classified these sentiments into three categories – geo-sentiment, socio-sentiment and human sentiment. Geo-sentiment includes sentiments, which grow out of attachment for a particular country or area. Out of geo-sentiment many other sentiments may emerge, such as geo-patriotism – nationalism or provincialism – geo-economics and geo-religion. Geo-sentiment is the sentimental expression of materialistic philosophies and is designed to keep humanity confined within a limited portion of the world, something which is contrary to the fundamental human desire for expansion.

A slightly more magnanimous sentiment is socio-sentiment, which do not confine people to a particular territory. Rather, socio-sentiment is concerned with a particular group of people who may be distributed over a large area and is pervasive in that community. Instead of thinking about the welfare of a particular geographical area, people think about the well-being of a community, even to the exclusion of all other communities. Those imbibed with socio-sentiment often do not hesitate to militate against the interests of natural growth of other communities while furthering the interests of their own community. The international capitalist class, transnational companies and the international working class movement all foster socio-sentiments and also exploit geo-sentiments to further their objectives. The White Anglo-Saxon Protestant church, Islam and other transnational religions are based mainly on socio-sentiment.

A more subtle sentiment is human sentiment. Humanism involves identifying with the achievements and sufferings of the human race and implies a commitment to human happiness within the laws of nature. Humanistic ideas have found expression in many philosophies throughout the centuries and have always put great stress on the intrinsic value and worth of human life. However, the expression of humanism is mainly confined to the realm of ideas and not action, as it involves no practical application. While its highest form is internationalism, it excludes other living entities like plants and animals, and is limited to humanity on planet Earth, not beyond.

Neohumanism is the most expansive human sentiment and embraces everything throughout the universe. According to Sarkar:

“All molecules, atoms, electrons, protons, positrons and neutrons are the veritable expressions of pure consciousness. Those who remember this reality, who keep this realization ever alive in their hearts, are said to have attained perfection in life … When the underlying spirit of humanism is extended to everything, animate and inanimate, in this universe – I have designated this as neohumanism. This neohumanism will elevate humanism to universalism, the cult of love for all created beings of this universe” – The Liberation of Intellect – Neohumanism, AM Publications, Calcutta 1982).