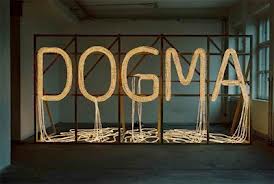 (13 April 1988, Calcutta) – Gad́d́ is a very ancient verb which means to do something without following any logic. When the human intellect was undeveloped, cunning people used to infuse various kinds of fear complexes, irrational ideas and unhealthy, selfish tendencies into the minds of the people to stop them following the path of logic and reason. Sometimes people were prevented from following the path of rationality, and on other occasions they were won over through magic shows, sleight of hand or so-called miraculous feats. By concocting many spurious and absurd stories, the cunning exploiters made others dance according to their wishes, like marionettes dressed in gaudy, coloured clothes in a puppet show. The exploiters would pull the strings from behind the scene, and the common people would move their hands and feet according to the whims of their masters. The people were kept dancing, stamping their feet and gyrating their hips, so they were never able to find the path of rationality. In fact, the very attempt to find the path of rationality was considered blasphemous.

“The followers of dogma do not want
people to tread the path of rationality.”

Movement which is devoid of logic and reason is called “dogma,” and a collection of dogma is called an “ism.” When the advocates of dogma and the followers of isms lacked sufficient charisma to convince people through the power of their personalities, they tried to persuade them by taking the name of God. They openly exploited others in the name of the Supreme. Sometimes they said, “I have received certain instructions in a dream. God’s commandments are that you should follow these instructions.” At other times they would intimidate people saying, “If you violate these commandments you will suffer eternal damnation.” Thus, they created complexes in the minds of the people, and they forced them to accept all kinds of dogma and follow them out of fear.

On other occasions they resorted to blatant falsehood and said, “These are the commandments of God. Those who contradict these commandments will be damned to eternal hell-fire… Your eyes will develop cataracts and your throat will contract goitre if you do not read the scriptures and pray to God every day… If the offerings made to God touch your feet, or if you do not touch your forehead after handling consecrated food, you will develop leprosy… It is God who has made caste divisions, the division of society into rich and poor, etc.” They propagated shlokas like:

They also created many fanciful and appealing stories, and demanded that people accept them as the truth. They declared that those who listened to these stories with reverence, holding a copper pot containing Gaun’gá water and basil leaves, would attain heavenly bliss, while those who showed any disrespect or disregard for them would be annihilated. Common, fearful people accepted such dogma without the least protest, and believed that absurd, mind-boggling stories were spiritual discourses.

Sometimes the exponents of dogma raised slogans in support of particular theories, even though most people were convinced that they were impractical and could never be applied in the real world. When the people did not get any benefit from them, they were told that they would have to work even harder. Such impractical theories ignored the fundamental characteristics of the human mind, so their proponents tried to encourage the greed of the exploited people, and berated them with ideological jargon. Thus, dogma has had a extremely negative influence on ordinary people. This is the consequence of the play of dogma.

I have said before that isms can never help establish universalism. Rather, they merely whip up artificial differences amongst human beings. By arousing narrow sentiments, the adherents of dogma hope to fulfil their selfish aspirations. Isms are nothing but a collection of dogma. Modern, educated people must be liberated from all sources of dogma and petty isms. They should reject the worn out shackles of the past and welcome the new, crimson dawn with an open mind. This will prepare the way for all-round success in human life, and the attainment of the highest fulfilment.

If you examine this issue deeply, you will observe that the young generation today is not willing to accept outdated, dogmatic theories and isms. If the knowledge of Bhagavat Dharma (the path of spirituality) is infused in young minds at the first flush of the new dawn, then dogma will be torn asunder in an instant. The upholders of dogma partly realize that clear, penetrating vision portends their doom. Consequently, some of them even exhort their followers, “Do not read such and such books… Do not even touch those books… They will cloud your judgement and confuse you.” However, the facts speak differently. The facts are that merely browsing through such books may or may not influence peoples’ minds, but studying them with proper understanding will definitely break the shackles of dogma.

*Brahmin (vipra), ksattriya, vaeshya and shudra are the four original castes in the Hindu caste system.

One thought on “Religious Dogma – 1”

Other material on Dogma: