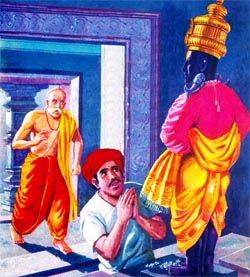 Chokhamela was the first known Dalit revolutionary in India. He achieved an inner, spiritual revolution. In one of his later poems, he writes that in the beginning he was an outcaste who worshipped a stone in a temple, but now he found himself filling the sky and universe and he worshipped the Lord as his very own Self. This inner revolution forced even the adherents of casteism to grudgingly give him respect as a saint.

Many have criticized Chokhamela for not being a political or social revolutionary. However they could not conceive of the spiritual stance of Chokhamela. They could not attain genuine inner peace, transcending all religious dogma, despite all their Marxist analyses. All types of revolution are essential; none can be neglected. Any caste revolution is useless, unless however it can kill the casteism in one’s soul after a lifetime of discrimination and abuse. Most educated people today have failed to attain the inner freedom, sublimity and powerful love of Chokhamela. For this reason alone we offer him our Namaskar (reverence).