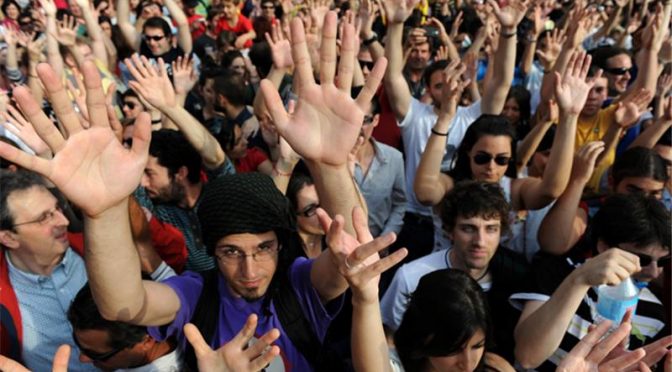 These and many other movements were non-existent only a couple of years ago and they have generated political participation and vision on a scale not seen in the West since the 1960s. At the time of writing such new movements hold 1,329 governmental seats in 25 European countries. Closed borders, low migration and protected trade are usually at the top of their agenda.

By addressing a single or a few concrete urgent issues, these new movements have been fuelled essentially by the raw passion their main issues awaken among the public. Take for instance the issue of low immigration. Until very recently it was the exclusive province of the far right. Then suddenly out of the blue the whole of UK leaves the EU largely because of it. What happened?

Basically, the EU dogma that nobody can question the right of the labour force of member states to move freely has failed to keep pace with reality. Locals obviously feel increasingly invaded and ultimately cry “halt!” when they feel that large waves of foreigners continue to inundate their shores in search for jobs in an alarmingly tight job market. As the EU principally serves the interest of market forces, even at the cost of people’s interests, it does not take local sentiments sufficiently into account, and hence the disastrous dogma was exposed.

The apparent reasons for Brexit may be many, and immigration is surely at its core. While we expect from human beings that they reach out and help others in need, we may also expect them to call for timeout when policies collide and people feel that immigration jeopardises their living standards.

Moreover, as most human beings enjoy meeting others, preferring new experiences to the boredom of an otherwise repetitious life plus they generally desire to be at peace and not at war, immigration cannot be the sole or fundamental cause of Brexit. On closer scrutiny the ultimate disease in this case appears not to be racism or xenophobia but the servility and submission to capitalism found throughout the professional political class. Put politely, the surreal centralisation of wealth in the hands of a few at the expense of the welfare of the majority, coupled with obvious bureaucracy in Brussels, have made a very powerful argument in favour of local initiative and self-determination.

Capitalism is indeed the cornerstone of the EU with its highly saturated market of free movement of labour, capital, services and goods which cannot safeguard the interests of local people. On the contrary, the present system of capitalists trying to beat other capitalists, will only continue to play into the hands of a diminishing number of successful players. Briefly put, when elephants fight the grass suffers and there will certainly be other “Exit” referenda following that of the UK.

In its present hyper-centralising stage, capitalism reduces the number of the prosperous at an exponential rate. The peoples of Europe and indeed everywhere in the world are therefore in urgent need of a new set of rules to live by. Instead of allowing capitalism to continue, we must develop principles and policies that protect the interests of locals everywhere so that nobody feels pressurised to move elsewhere for economic or other materialistic reasons.

Contrary to the response of commercial media and professional politicians, the current uprisings in so many European countries are neither primitive nor populist and do not pose a threat to democracy. Rather, these movements are obvious warning signs to career politicians and grand party structures that have turned into dangers to democracy themselves.

It is wise to move with the times, obviously. Our understanding of what is radical and conservative is changing all the time: radical today, conservative tomorrow. It should not come as a surprise therefore that any new and intriguing movement is radical, and that this label more often than not with time turns out to be a term for “anti-establishment” or change, and not for “undemocratic” or criminal.

Any living organism has its origin from where it derives support and energy to rise and realise its full potential. If the environment no longer allows that organism to thrive it must retreat to those roots, to those radices (roots in Latin) in order to be able to move forward in a new direction.

In fact, traditional political parties, too, once upon a time rose as determined interest groups to challenge a monarch’s tyrannical powers. Those group efforts that lasted then ended up as standard party choices of the present system of parliamentary democracy. In some countries such forces amalgamated into a broad-based two-party system. In many other countries we still find a plethora of particular interest political parties right, left and centre that make for a continuously shifting and often odd mishmash of governments.

Conventional rightist, leftist and centrist bigwigs may well view the new radicals with abhorrence. The new parties may not however aspire to establish itself on top of a traditional right-left spectrum. Instead, they may be moving towards a new dimension beyond the right and left where party politics may be obsolete.

In truth, we all have the same roots. Only some have opportunistically forgotten our common existence as they increasingly seek to feed on the lifeblood of others. The most important idea to emerge in the 20th Century, Ecology, taught us two remarkable truths about our individual and collective reality:

Our world does require a fresh ideology that embraces collective needs and rights as well as the ability of every living being to progress and contribute in its own particular way.

The time for Prout is approaching fast. We are a single humanity living in one world: Human beings do not want to be divided at heart. So where is the need for party politics – and capitalism, really?