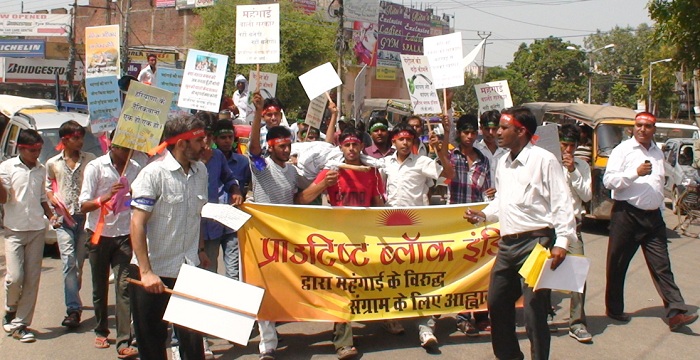 (Faridabad, Delhi, September 20, 2011) – Under the aegis of the Proutist Bloc of India (PBI) people on the streets of Faridabad registered a strong protest in the form of a demonstration and procession from Hardware Chowk, a main square in Faridabad city outside of Delhi, to the District Commissioner’s office where an effigy of the state government assembly was burnt.

“The continuous rise in petrol prices is not only a burning issue but an issue of the survival of the middle and lower classes and their leading a peaceful life,” PBI General Secretary Rajesh Singh said. “The wide media coverage here today proves that the government has lost control over commodity prices in general. The issue no longer hurts only the poor but have become a serious threat to middle class life as well,” Singh said.

India is one of the fastest-growing economies in the world, but has been hit hard by rising consumer prices. Rising vegetable prices, transport costs and house rents are slowly squeezing household budgets forcing families to cut down on their food budgets and leaving them with virtually nothing to save, The Times of India has reported. India’s move to increase gasoline prices by the most in three years may accelerate what is already the fastest inflation rate among Asia’s major economies, damping demand for the nation’s assets, Bloomberg has concluded.

A memorandum to the Prime Minister of India demanding an immediate roll back of rising gasoline prices was handed over to the government authorities by PBI representatives.

Other material on Movements, News: