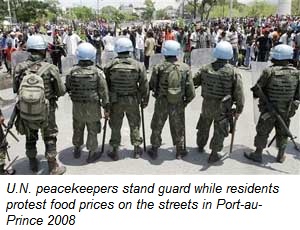 The average price of staple foods will more than double in the next 20 years, leading to “an unprecedented reversal in human development,” Oxfam warns. Spiralling food prices and endless cycles of regional food crises will create millions more hungry people unless we transform the way we grow and share food, the international poverty and injustice watchdog says in a report.

Oxfam forecasts that international prices of staples such as maize could rise by as much as 180% by 2030, with half of that rise due to the impacts of climate change. Demand for food will rise 70 per cent  by 2050 yet the capacity of the present system to increase food production is declining. The average growth rate in agricultural yields has almost halved since 1990 and is set to decline to a fraction of one percent in the next decade.

These news come on a day when figures show that up to 300,000 cash-strapped households in the UK have switched more than £60bn of mortgage debt from repayment into risky interest-only deals over the past three years to help cover their living costs. The UK figures demonstrate “just how desperate families have become as they contend with what the Governor of the Bank of England has described as the most dramatic squeeze on family finances since the 1920s,” the conservative Daily Telegraph writes.

“There are enough resources in the world for everyone’s need — and more — but not enough to satisfy the greed that lies at the core of the present socio-economic setup,” comments Proutist Universal spokesman Ac. Siddhayogananda Avadhuta. ”

“The main problem is that ordinary people are no longer in control of their economic destiny, ” Ac. Siddhayogananda says. “Look at a country like Guatemala. Despite being a leading exporter of food in the region, one out of two Guatemalans  live in extreme poverty.

“When criticising  communism’s centralised  economic system we tend to forget that capitalism is as centralised in its own way, hiding its centralisation behind a veil of so-called liberty. But who is really free in the capitalist world, and at the cost of how many who continue to suffer as a consequence of that system?

“The food crisis is perhaps the most important of numerous large and smaller crises that will lead to necessary changes in the way our world is run. PROUT agrees with Oxfam’s conclusion, that without necessary changes the world population will continue to suffer more and more serious food shortages and other natural and man-made crises.

“What is needed is a consumption-oriented system, not a profit-motivated one. Today’s desperate figures from the UK, where so many standard families just can’t cope any more, should be a wakeup-call for policy makers. But it is hard to see any really constructive initiative coming out of global capitalism,” Ac. Siddhayogananda says.

Other material on News: