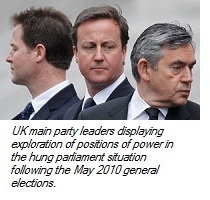 (May 11, 2010) – Take a look at the snapshot [of Gordon Brown, Nick Clegg and David Cameron]. Do you get a good impression? — Neither do we: Three UK top politicians deeply involved in playing their fundamental game of self-service. The picture indicates that they don’t think much of each other, doesn’t it? A follow-up question would be: What do they actually think about us, about the electorate?

Nothing is only good or bad but party politics come close. The most serious fault of party politics is perhaps that those who rise within the party system do so more by adjusting with internal party dynamics and less as a result of their positive service to society.

A better political system, a more expansive and inclusive system, would be individual platform representation. Each elected candidate would be held responsible to their published program so that the electorate may challenge severe inconsistencies and even get a candidate unseated should the betrayal of his or her program be great. Nebulous party dynamics would not stand any chance in such a transparent system.

We should end our support of any political party. By putting an end to the instinctively selfish party-animal we would be able promote the dignity of humane, sensitive politics personified by an enlightened electorate and a more representative and responsible individual candidature. The age of party politics is over. The future belongs to an enlightened humanistic political system. Any focus on party differences is bound to cloud issues of real and genuine interest to human beings.

Other material on Party politics: