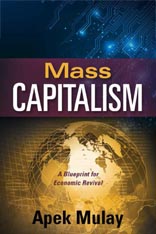 Semiconductor expert Apek Mulay may have been a naughty child. His own mother may or may not agree but Mr. Mulay still appears to be mischievous today. In Mass Capitalism, A Blueprint for Economic Revival, Mr Mulay serves up heavy systematic criticism of capitalism — while promoting “mass capitalism.” Mass capitalism? Everyone knows there is no such thing as mass capitalism. We have private capitalism, state capitalism (as under communism), mixed economy (where private sector sponsors public sector directly and indirectly through such means as employment, taxation, etc.), corporate capitalism, crony capitalism, to name but a few. But we will never have mass capitalism and for a very good reason: Capitalism is naturally limited to economic exploitation carried out by the few on the many.

In fact, everyone cannot perpetrate economic exploitation in the same way as a herd of cows cannot subsist for very long only by drinking the milk of each other. Cows must graze and calves must stop drinking after a while to allow for newcomers — and someone quite different must do the milking and butchering, that is how exploitation of cows goes. Even if one construes a term such as “majority capitalism,” where economic exploitation would be carried out by the many on the few, it would be a misnomer. Such a system cannot sustain, at least not over time, let’s say for more than a few minutes, as there simply would not be enough genuine source material to be exploited by the disproportional (majority) number of exploiters. This is the reason pyramid schemes invariably collapse, and sooner rather than later. So what does Mr. Mulay mean by mass capitalism?

Alas, it appears that the imaginative Mr. Mulay is not alone but in cahoots with the spirited economist Ravi Batra, Professor of Economics at Southern Methodist University, Dallas. The latter is the actual coiner of the term mass capitalism. When employees own the majority of shares in large companies and private property on a massive scale, it is mass capitalism according to Dr. Batra.* Similarly, Mr. Mulay suggests a system “that would lead to free market reforms, enabling capitalism to work for the masses, and would take the US semiconductor industry to the next level of innovation and financial success.”

Then what is their mass capitalism actually? Mr. Mulay reveals to us that it is nothing but a pseudonym for PROUT, the Progressive Utilization Theory. It is well known that American policy makers and most of the public and the media are wary of the term “socialism” in the same way as a hyperallergic person is wary of fiendish allergen. So while PROUT´s founder Shrii Prabhat Rainjan Sarkar dubbed PROUT “progressive socialism” (while dismissing capitalism to the scrapheap of destructive and useless systems), Mr. Mulay goes along with Dr. Batra´s local market plan.

PROUT postulates that no one should be allowed to accumulate physical wealth without the permission or approval of society. This is its first fundamental principle. Its scientific base is that physical wealth is finite whereas human urge is infinite, and therefore accumulation of physical wealth must be limited in the interest of all, while accumulation of mental and spiritual wealth should be unlimited. Becuase of the inherent limitedness of all things physical, capitalism in any form and shape can never sustain.

There is no way we can call PROUT capitalism; PROUT is not a system of private capitalism and it is also not state capitalism, it rejects economic centralisation and promotes economic decentralisation. Since the picture of Shrii Sarkar adorns the book´s dedication page, and PROUT is the ideological focus of the Mr. Mulay´s work, it seems only right to emphasise this point.

Is Batra and Mulay´s mass capitalism only a contrived selling point then? Yes, in all probability. Since the beginning of the semiconductor race, the US has been the leader of the pack, with Intel, Qualcomm, Texas Instruments, Broadcom and Micron Technology claiming nearly one third of the global market share at present, while the combined force of South Asian giants Samsung and Hynix (South Korea) and Toshiba and Renesas (Japan) amounts to less than 20%. Mr. Mulay proves to be a strong advocate of the US sustaining and even increasing that share – by “mass capitalism.”

All in all, Mr. Mulay´s work offers a great view from the American standpoint. As is common knowledge, all indications are that the Western economy is in for a very rough ride, in particular because the Western individualised world has sacrificed so much of its social, cultural, and industrial base to external interests, and in the process has outsourced large chunks of its technical skills and knowhow to foreign agencies and lands. Life on other continents on the other hand seems to have retained more of a traditional structure. Therefore it seems probable that a sinking global economy and the eventual collapse of capitalism as we know it would harm the First and Second Worlds infinitely more than the Third. It is therefore not inexplicable that Mr. Mulay and Dr. Batra find it opportune to stimulate a will and sentiment to do something radical about the impossible situation of their (new) country and economic sphere.

The author´s solid background in the semiconductor industry, and his lofty vision of an economic and industrial system based on PROUT is instructive at a time when our very survival is in need of a new paradigm that can carry it forward into a world of numerous new beginnings. Thinkers and activists, also from other parts of the world, would be able to draw lessons from Mr. Mulay´s patriotic fervour based on his methodical professional and systemic analyses and syntheses.