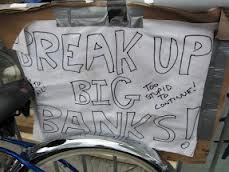 (PROUT Globe, September 26, 2012) – The International Monetary Fund has warned that bank reform has stalled, and that financial regulators need to consider breaking up big banks to make the global economy safer.

“Banks are as risky as they were before the financial crisis and are devising new ways of gaming the rules,” the IMF states in its Global Financial Stability Report.

“Lenders have already begun developing innovative products … to circumvent some new regulations and have started shifting business into shadow banks, where new banking standards do not apply,” the IMF report warns.

According to PROUT, bank reforms will not be able to deliver any meaningful changes under global capitalism. Instead of trying to break up the present super-sized, exploitative banking structure, a new banking system has to be grown from grassroots.

Under PROUT banks will run hand in hand with local ventures and will not be allowed to accumulate profits and invest on their own. With the exception of the central bank, banks will only operate in the interests of local people.

Typically, cooperative industries – production, consumer, housing, service, etc. – will establish their own banks in order to finance the needs of their cooperative and its members.

One thought on “– Break Up Big Banks; IMF”