(PROUT Globe, June 2013) – The gap between haves and have-nots in the Unites States is now so unhinged that researchers find it difficult to fit it with that of other developed nations. A new report from the International Labour Organization shows that U.S. inequality has literally gone off the chart, TruthOut reports. 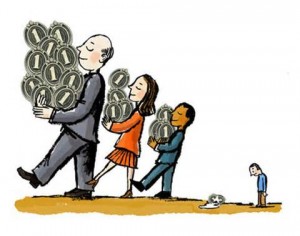 “Income inequality in the United States is soaring so high, in fact, that the authors of the ILO’s new 2013 World of Work report couldn’t even place the United States on the same graph with the other 25 developed countries their new study examines,” the agency writes.

See an informative video on the present income inequality in the U.S.

Little has changed since in terms of government income policy. In an interview with PROUT Globe last year, Proutist economist Ravi Batra stated that the wealth gap “is conscious government policy. The sad part of it is that it reflects political corruption. Anything that reduces labor demand will reduce the real wage and reduce people’s salaries.”

In its effort for creating a dynamic and just economy, PROUT focuses on the surplus available to society after the minimum necessities have been supplied to all. By fixing both a ceiling for maximum salary and private property, as well as a minimum wage, a surplus will be available for further distribution to the meritorious. This factor, the allocation of incentives for further dynamics among the meritorious after first having secured basic necessities for all, is called atiriktam in the PROUT system.

“For long, economic efficiency and fairness have been regarded as two separate issues. Many have argued that economists should not even consider equity at all,” notes a recent book on PROUT, After Capitalism, Economic Democracy in Action.

“Atiriktam resolves this dilemma both logically and morally,” argues the book. “PROUT asserts that the only justification for granting higher income to a person is to reward him or her for providing a greater benefit to society.”

At present in America, inequality is not only “off the chart” but still rising. Income inequality in the U.S. rose during the recession of 2008-2009, and continued rising through the lackluster recovery of 2010-2011.

Read also: The Bubble and the Wealth Gap