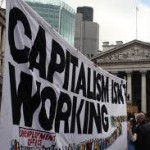 In 1958, while addressing a wide range of social and economic issues prior to the formulation of PROUT, P.R. Sarkar commented that work hours should be shared and that it is impossible to effect such sharing under capitalism due to its domineering profit-motivation:

"Those who want to promote public welfare without antagonizing capitalism will have to oppose mechanization. This is because when the productive capacity of machinery is doubled, the required human labour is decreased by half, so the capitalists retrench large numbers of workers from their factories. A few optimists may say, “Under circumstantial pressure other ways will be found to employ these surplus labourers in different jobs, and the very effort to find these alternatives will accelerate scientific advancement, so the ultimate result of mechanization under capitalism is, in fact, good.” This view, though not useless, has no practical value, because it is not possible to arrange new jobs for retrenched workers as quickly as they become surplus labourers due to rapid mechanization. Surplus labourers are ruined, bit by bit, due to poverty and hunger. A few among them try to keep body and soul together by resorting to petty theft, armed robbery, profligacy and other sorts of antisocial activities, but this situation is certainly not desirable.

"In a collective economic system [Sarkar propounded PROUT a year later in 1959] there is no scope for such an unhealthy situation; in this system mechanization will lead to less labour and more prosperity. With the double increase in the productivity of machines, the working hours of labourers will be reduced by half. Of course, the reduction in working hours will have to be determined keeping in view the demand for commodities and the availability of labour.

"In a collective economic system the benevolent use of science will bring about human welfare. It is possible that as a result of mechanization no one will be required to work for more than five minutes a week. Not always being preoccupied with the problems of acquiring food, clothing, etc., people’s psychic and spiritual potentialities will no longer be wasted. They will be able to devote ample time to such activities as sports, literary pursuits and spiritual practices.”

While following up on the formulation of the five fundamental principles in 1959, Sarkar added:

"It is incorrect to say that rationalization is the root cause of the unemployment problem. Such propaganda is carried out by leaders having little knowledge of socio-economic philosophy. The question of unemployment arises only in the capitalistic framework where industry is for profit. In the collective economic structure, where industry stands for consumption and not for profit, the question of unemployment does not arise. Here the number of labourers will not be lessened; rather the working hours will be reduced and the remaining hours will be used in mental and spiritual pursuits. The reduction in the working hours depends not only on yield, but on the demand for commodities and the availability of labour."

"PROUT supports maximum modernization in industry and agriculture by introducing the most appropriate scientific technology, yet modernization and rationalization should not lead to increased unemployment. In PROUT's collective economic system, full employment will be maintained by progressively reducing working hours as the introduction of appropriate scientific technology increases production. This is not possible in capitalism."

2 thoughts on “Full Employment and Reduction of Working Hours”