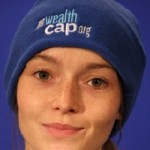 Dada Vedaprajinananda
Some years back, street demonstrations in Seattle against globalization and the World Trade Organization, known as the “Battle of Seattle” briefly caught the attention of the news media. One BBC commentator remarked “We know what the demonstrators are against, but we don’t know what they are for.”

I can’t speak for all those who have come out on the streets or have expressed themselves in other ways. But if someone were to ask me what “we” want, the first item on the top of my list would be that society should enact a cap on personal wealth.

When it comes to alleviating poverty and correcting social inequalities liberals have always talked about things such as a proper minimum wage and a social safety net, in the form of healthcare, unemployment insurance and other measures.  They say that no one should be allowed to fall under the poverty line, that there should be a floor in our collective house which no one is allowed to slip under.

This is certainly a noble concept, one which I support, but the glaring social inequalities and economic injustice which has brought the demonstrators out on the streets can never be solved only by concentrating our efforts on traditional anti-poverty legislation aimed at shoring up the floor of the economic system.  Rather it is more important to start thinking about putting a ceiling on our economic house.

The ceiling that I talk about is a ceiling on individual wealth accumulation.  Presently the sky is the limit. Anyone can accumulate as much wealth as he or she possibly can. Selfish accumulation of wealth, we are told, is the engine that drives the economic system, and that one day the wealth that is accumulated by the people at the top will trickle down to everyone else.

Trickle-down economics is a myth. Around the world a small number of people own and control a disproportionate amount of wealth. This unequal distribution of wealth leads to all kinds of social and economic problems including poverty, starvation, crime, social disruption, and more.  The greed of a few is not healthy for the wider society.

The solution to this problem is not to enact a maximum wage bill or even a maximum income bill. Such measures would only address part of the problem, and leave a few people with their wealth intact. Rather it is time for a more drastic measure: establish the upper limit on individual wealth holdings, and to confiscate and redistribute the excess wealth.

If you have read this far, you might think that I am a raving lunatic. If a wealth cap was even proposed the super-rich would be up in arms.  They can barely stand it when someone even suggests that their taxes be raised a little, what to speak of confiscation and redistribution.

Not only do the rich and super rich go ballistic when anyone raises the wealth issue in public, but middle class people in the USA also take their side. A lot of people really believe that one day they too will be very wealthy and fight for the rights of the wealthiest few to continue grabbing all that they can.

I am well aware that the proposal to cap wealth in this country or anywhere else is not something that will be easily adopted, but sooner or later, when people come to their senses and really understand the root causes of our present economic problems, I am confident that they will whole heartedly agree with the Indian philosopher and activist, P.R. Sarkar who in 1959 declared “No individual should be allowed to accumulate any physical wealth without the clear permission and approval of the collective society.”

Copyright The author 2011
Visit www.ru.org for more articles by the author

One thought on “Is it Time for a Cap on Personal Wealth?”