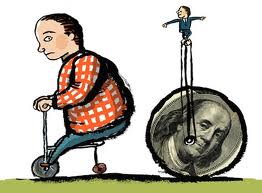 In the U.S. ninety percent of the people own less than a quarter of the nation’s wealth (as measured by net worth). The richest half of one percent own almost a third (Mishel and Frankel 1991). Many hard-working people have negative net worth, and almost thirteen percent are in poverty. When confronted by such statistics few would regard such a distribution fair. It is inconceivable that the holdings of the wealthiest group are in any way proportionate to their contribution to society. Yet such inequality persists and is generally tolerated.

Beliefs, which underlie tolerance of such inequality, will be explored and challenged in this paper. What is hoped will be a more rational and humanly beneficial basis for determining income and wealth distribution will also be presented.

The first part of this study describes the moral, philosophical, and ideological framework of issues related to our inquiry. The more economics pretends to be a value-free positive science, describing timeless truths independent of ideology, historical time, and cultural norms, the more the falseness of this proposition becomes evident. Other authors have demonstrated this theme well, so I will not belabour it here. The point is made to avoid making the same mistake. Chapter II was written with the conviction that it is better to affirm and be aware of the value assumptions that underlie our studies so that they may be thoroughly thought out.

This paper is elaborating and extending on ideas presented in the system of socio-economic thought developed by the Indian social philosopher P.R. Sarkar. He called his system PROUT, an acronym for the Progressive Utilization Theory. Relevant aspects of the theory will be also be presented in Chapter II: The Philosophy of Inequality and the Proutist Challenge

Chapter III: Productivity and Income Inequality discusses elements of human productivity, and from these I derive a model for determining what amount of income inequality between individuals is actually justified in society.

Chapter IV: Solutions: How to Reduce Inequality presents ideas that have been presented by various economists for reducing income inequality.