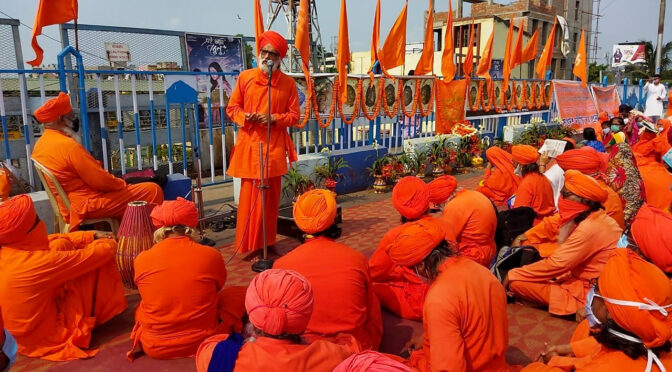 (Kolkata, 30 April 2021) – Ananda Marga Pracharak Samgha today organised a silent procession and observed a solemn program following Covid-19 protocols to commemorate the brutal killing of 17 monks, nuns and grihi margiis by CPM goons 39 years before on 30 April 1982 at Bijon setu. The program began with singing of Prabhat Samgiita, Kiirtan and meditation. Senior functionaries of the Marga headed by Acharya Bhaveshananda  Avadhuta, General Secretary of Ananda Marga Pracharak Samgha, offered garlands to the 17 Dadhichis and paid their homage to the Departed souls. Acharya Mantrasiddhananda Avadhuta narrated the background of this barbaric incidence and the great sacrifice of 17 dadhichis. Shri Bivanshu Maiti, who was a victim of the incident, spoke on the eye-witnessing account. Photographs of the mutilated bodies of the departed souls were displayed respectfully at Bijan Setu.

From the very beginning, the Marga has been demanding a Judicial Inquiry of the incident by a sitting Supreme Court judge that has not been fulfilled yet.  The Amitabha Lala Inquiry Commission constituted by the state govt has completed its inquiry and submitted its report. The Marga expect that the commission books the culprits and expose how CPM’s top authorities were involved in the heinous conspiracy and cruel crime.