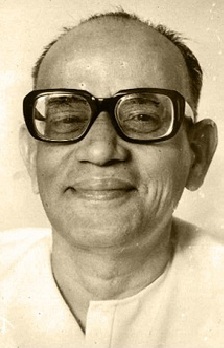 In December 1971, as persecution of PROUT founder Shrii Prabhat Rainjan Sarkar and his socio-spiritual movement Ananda Marga intensified, he was falsely accused of various crimes and imprisoned for nearly seven years. However, those in power found it hard to break him. One of the central jail officials commented, “Even Napoleon was tamed by jail, but this living tiger cannot be tamed.”

On February 12, 1973, Sarkar was seriously poisoned by an overdose of barbiturates administered by a prison doctor, after which he went on a protest fast, challenging the authorities who were not responding to his repeated calls for a critical inquiry into his poisoning. The poisoning had left him in a weak and bedridden condition for the remaining five years of his imprisonment. Throughout this period he survived on a cup of salted whey twice a day.

We may remember that great personalities in any era of history face unbounded persecution as soon as they begin their fight for justice and dharma and for their courageous attempt to implement neohumanism. Was the founder of PROUT any exception? No. For eight long years he was mercilessly tortured and humiliated in prison.

Prime Minister Indira Gandhi and her communist allies became obsessed with destroying PROUT, due to the adamant morality of its founder and his non-compromising stance on issues of justice and injustice. The prime concern of Sarkar was always the welfare of the common people.

At the time of his arrest, a CBI official (obviously at the behest of the Government of India) offered him a ministerial berth in Indira Gandhi’s cabinet if he issued a statement that though he had propounded PROUT, he was not a proutist. To which his characteristic reply was, “My dear gentleman! If ever I will be born as an animal, I will think over your august advice.”

In 1975 Indira Gandhi declared a state of emergency, banning PROUT and arresting many of his followers — so great was her fear of the short, five foot three, bespectacled man clad in simple kurta and dhoti.

PROUT is the socio-economic-political side of Sarkar’s total philosophy that mingles multiple concepts of spiritual, economic, political, social and cultural liberation. It is a critical aspect of his entire ideology, because in order to create a heaven on earth for the people of the earth, we need to first remove the great social ills besetting our planet. We also need to obliterate the existing economic paradigms which wreak havoc around the world with their hidden doctrines of intentionally increasing impoverization and ensuing massive suffering and starvation. Thus, PROUT remains an absolute necessity to mitigate and then remove the sufferings of humanity and to pave the way for a golden dawn on earth.

Excerpted from P.R. Sarkar: Beacon of Hope for Suffering Humanity by Garda Ghista. Get it at Amazon

6 thoughts on “40 Years Since Sarkar Was Jailed, Poisoned”