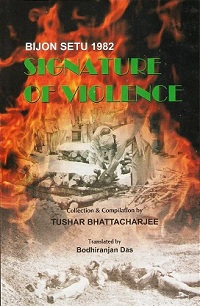 The 1982 Bijon Setu massacre, where 17 whole time workers of Ananda Marga were brutally killed, and its pathetic aftermath is the subject of a new book out from Ananda Marga, Kolkata. Based on the undaunted film by Tusar Bhattacharjee, the book documents how the then West Bengal Communist government chose to leave the horrid incident and its own possible implication in the murders not investigated. The book contains fresh significant information and details on how the attacks were planned and executed.

An investigation report by B. M. Sinha that was published earlier in Hindustan Times, the report of Central Intelligence, as well as interviews of several eyewitnesses and members of civil society, all produce substantial proof that would have influenced the recent intiative of the present state government to establish at long last an inquiry commission in the case.

In the book, Sher Singh, a retired officer of the highly esteemed Indian Administrative Service, who was then the additional District Magistrate of 24 Parganas, the area of Kolkata where the murders took place, explains why the mighty Communist party felt it necessary to cruelly attack in broad daylight a group of service-minded people, monks and nuns of a comparatively small spiritual group such as Ananda Marga. The only reason was the PROUT philosophy propagated by the organisation, Singh suggests. The Ananda Marga organisation promotes PROUT throughout India and the world. Documentary proof of the meetings held by the Communist party (CPM) to spread canard against Ananda Marga are also included.