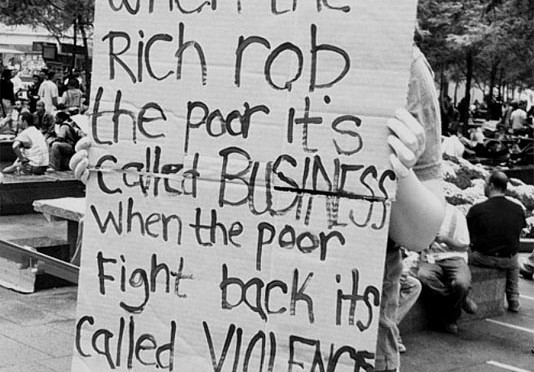 This short article discusses the need for regulating the amassing of any type of wealth: physical, psychic and spiritual. PROUT proposes to place a limit on the accumulation of physical wealth, whereas a regulation of psychic and spiritual wealth requires no ceiling but instead a vigorous cultivation of a sense of proper direction.

For the last 20-30 years, the wealth of the world’s billionaires has grown three times faster (between 6 to 7 per cent allowing for inflation) than the rest of the economy (about 2 per cent), the French economist and author of the controversial book Capitalism in the Twenty-First Century, Thomas Pikkety has found. If capital acquisition continues at the same pace, the billionaires will own all capital by 2050, he concludes. Pikkety calls for a 5% to 10% annual tax on all assets – stocks, bonds, real estate, natural resources, art, yachts, etc. – owned by individuals with a net worth of a least $1 billion.

Pikkety would possibly be willing to discuss PROUT’s fundamental principle of regulation of wealth accumulation. Still, PROUT goes much further than most reformers of capitalism when it comes to making improperly accumulated physical wealth available for general utilization. The first principle of the PROUT socio-economic theory states that no individual should be allowed to accumulate any physical wealth without the permission or approval of the collective.

In a 1986 discourse, on the transformation of psychic wealth into psycho-spiritual wealth, Shrii Prabhat Rainjan Sarkar offers a brief explanation of this fundamental principle of PROUT:

Those dominated by hungry psychic urges and who run after material gains do not hesitate to exploit others mercilessly. Exploitation starts when one violates the principle of aparigraha and accumulates more physical wealth than one actually needs for survival and progress in the world. The exploiters forget the basic truth that this material world is very limited, whereas psychic pabula is propelled by an unlimited urge. When unlimited pabula are let loose in the limited material world, exploitation starts. A few become rich and others become poor. In such a condition millions die without food, live without shelter, work without education, suffer without medicine and move without proper clothing. The society then splits into two distinct groups – haves and have-nots.*

PROUT establishes that someone’s physical capital formation should not be allowed to hinder the opportunity of others to have a decent standard of living. On the contrary, the entire world with all its potentialities is the common property of all, in the same way as inherited wealth is the common property of all the inheritors. In this case, all living beings are the sons and daughters of the Cosmic Parents–Consciousness and Force of Creation–who has given everything. All of us are entitled to utilize the resources and potentialities that lie within both the world and ourselves.

When it comes to the management of agricultural land, PROUT proposes a particular policy of regulation. In Talks on PROUT Shrii P.R. Sarkar advises:

One pertinent question is whether both a ceiling on landed property and a ceiling on bank balances have to be imposed. It goes without saying that both methods have to be adopted, but the latter should precede the former. This will bring immediate cash to the government to help establish new industries on the one hand, and it will check the growth of capitalism on the other. By enforcing land ceilings no direct benefit can be expected to accrue to the nation because the available arable land will not be increased, nor will production be increased, since it is not the function of the government to cultivate land. Such an approach would wound the public sentiment and the public would think that the state had replaced the big landowners. In the face of food shortages it is not advisable to change land policies immediately.

The general land policy of PROUT is to support the gradual evolution of cooperative management.**

Suppressing people’s access to psychic wealth has been a main tool of oppressive regimes. Today we see it clearly in the form of Internet censorship of China’s peculiar communist-capitalist regime, as well as in Islamic states where people are banned from dressing as they wish, voicing their sentiments, etc.

PROUT is diametrically opposed to any stifling of intellectual and spiritual pursuits. At the same time, PROUT recognizes the need for regulating the formation of subtle forms of wealth too. Such regulations should not, however, take the form of limitation of accumulation of psychic wealth but of purposeful, meaningful, proper direction.

The third fundamental principle of PROUT states that there should be maximum utilization of all physical, metaphysical and spiritual potentialities of individuals as well as of entire human society.

This principle stresses the integrated development of all human capacities, including the often-neglected psychic, creative and spiritual. Individuals in the society should have the fullest scope for development of their various talents without fear of suppression or oppression; rather such expression should be socially encouraged. Such an approach should naturally apply to all, without regard to sex, race, caste or any other sort of categorization. The developed talents, skills and knowledge should not then be hoarded or used for any form of exploitation, but rather be made the collective property of the society that has nurtured them.

Human beings themselves constitute the greatest potential. If no proper development takes place internally, there will be no proper external development either. Constant efforts should therefore be made to harness human potential, and not to hurt or damage it.

A few practical examples, the first one being that of the presence of paedophilia on the Internet. The Internet is an enormous source of knowledge, a powerful business market place, and a wonderful treasure chest of entertainment for billions all over the world. Meanwhile, paedophilia and other perverted activities are also spreading fast on the same Internet. Pedophilia is a bio-psychological disease and not a human right, just like any other serious mental diseases. The right of a gravely mentally ill person is to get well and not to act out their fantasies, and in too many cases to transfer his or her disease to innocent victims. Thus, in the interest of children, as well as of the diseased persons, pedophilia activity on the Internet has been criminalized the world over. When perpetrators of pedophilia are properly cured, they can progress and the world of children becomes a better safer place. It is a tragedy that such cures are seldom found in today’s world. Hence, the well-being of everyone lies in firmly limiting the scope of pedophiles, and constructive efforts made to aid them in reorienting themselves and building their future in a sound bio-psychological way.

The regulation of the accumulation of psychic wealth implies, in other words, a positive orientation from the crude towards the subtle, by transforming psycho-physical urges into pure psychic and psycho-spiritual endeavours.

Take another subtler example: A group of Class 7 students begged their chemistry teacher to do a project on making explosives. What was the teacher’s response? As intellectual wealth should be free for all, did he go along with the naughty students demands? This wise teacher honoured the principle of not limiting the expansion of the students’ psychic wealth, and he did so by directing his students properly. Instead of teaching those excited youngsters how to make explosives, the teacher chose first of all to enlighten them on the character of the great Swedish chemist and scientist Alfred Nobel, who invented dynamite and numerous types of armaments. Mr Nobel was a genius who also happened to make a lot of money by manufacturing arms and explosives. Later on in life, after giving due thought to the need for higher human development, Nobel decided to place his vast earnings in the Nobel Prize Foundation that continues to this day to honour persons all over the world who do something extraordinary in the areas of peace, chemistry, physics, medicine, economics and literature.

The young chemistry students were duly impressed by their wise teacher’s story about the lofty thinking of a master chemist, and decided to leave explosives for now and instead go back to basic chemistry as well as the cultivation of a newfound interest in great human achievements.

The capacity and maturity of students has to be taken into account at all stages of instruction and teaching. Another example, to teach reading and writing by standard methods to persons with significant dyslexia problems will not do, as such students require an appropriate learning methodology and special tools in order to develop their language skills.

One must always pay attention so that one does not lead people astray or waste their time in useless and even potentially dangerous learning. To initiate a novice in advanced and sophisticated techniques of meditation may not only be useless but even harmful. In all areas of life we need to crawl before we can walk. However, this basic fact of life does not mean that future opportunities are thereby closed to us. The subtler spheres of existence always welcome the able aspirants to avail themselves of the endless opportunities that they provide.

It is said that the spiritual path is beset with obstacles. It is so because every step on this path presents a challenge to deep-seated animalistic tendencies in us: the legacy of our evolutionary past. Whenever we strive to take a significant step forward on our life’s journey, the instinctual nature in both others and ourselves raises its primitive head in a stubborn effort to hold us all back. Hence, the path towards sublime spirituality is the path of sublime individual and collective struggle.

The foremost device for regulating spiritual wealth is therefore inspiration. To remain highly motivated and stimulated towards true greatness is the key to spiritual advancement. Without such boundless inspiration it would be next to impossible to uplift and evolve the animalistic mind towards the sublime stages and final emancipation. Hence, inspiring others and ourselves is crucial to evolving practical spirituality.

The second device for regulating spiritual wealth is selfless service. Amassing spiritual energy results in the build-up of vast amounts of various forms of positive energies. All of it has to be spent for the well-being of all in order for selflessness to take hold and manifest fully in the practitioner. Otherwise, two dangerous developments may occur: egoistic attachment to subtle spiritual energies and their powers, and increasingly suppressed unresolved worldly urges. The Isa Upanishad (verse 12) states:

The essential meaning of this verse is: Those who keep acting only in the world drift towards darkness, due to their increasing attachments to the results of their actions; and on the other hand, those who worship the spirit only depart into even deeper darkness, due to the resulting split between their spiritual state and the remaining worldly urges in them.

Who should genuine spiritual practitioners serve? They should unreservedly serve both their spiritual goal as well as all of its manifestations. It means that one’s spiritual practice should be a service to the Supreme, and besides that one has to fully engage oneself in the service of all those in need in the world – plants, animals, human beings – who are all but the expression of that same spiritual entity.

PROUT establishes the ageless wisdom of spiritual approach and all-round adjustment in the physical realm, while keeping in harmony with the needs in the psychic and spiritual realms. It is a service-oriented socio-economic theory that paves the way for balanced solutions to all physical, psychic and spiritual troubles. By properly regulating the utilizations of all potentialities, people will be able to advance much further on the path of human evolution and reach still higher stages of attainments in all spheres.

* “The Transformation of Psychic Pabula into Psycho-spiritual Pabulum.” A Few Problems Solved – Part 8. The Electronic Edition of the Works of P.R. Sarkar, Ver. 7.5, Ananda Marga Publications 2009.
** See http://proutglobe.org/prout/socio-economics/economics/economic-democracy/cooperatives/ for material on PROUT’s cooperative models, agricultural and others.

One thought on “The Regulation of Wealth”