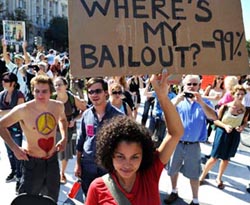 Update November 2013: Protesters wearing the white-faced Guy Fawkes masks that have become synonymous with the Occupy movement and the hacktivist grouping Anonymous have taken part in hundreds of gatherings around the world in opposition to causes ranging from corruption to fracking. Click to read

(July, 2012) A year ago mid-July the Canadian magazine Adbusters sent a tweet that triggered the Occupy movement. “Flood into lower Manhattan,” it said, “and Occupy Wall Street.” Thousands responded in cities throughout the world and the Occupy movement was soon hailed as the new radical force.

Many say Occupy movements around the world died choking on open, consensus-based decision-making. Daily outdrawn, repetitive, sometimes bizarre democratic seances resulted in little more than numerous unhelpful responses to cooperating with authorities, and resourceful, educated stalwarts vacating the area with very apexed eyebrows. Such slow, tedious processes on the street do not make for immediate revolution.

Yet, practising the right of all to be heard on his or her own terms, however painfully impractical its shape and form, was not the reason for the death of Occupy Wall Street. Its anarchic pseudo-democracy simply filled the vacuum of what the movement should have been.

Rather, the early Occupy succumbed to an infantile disorder characterized by inability to evolve from reacting to corporate greed to formulating the beginnings of coherent alternative economic policy.

A real revolution today would nail its economic priorities right from the start. All-round struggle against capitalist profitmaking and the introduction of economic democracy would be its main features.

The Occupy Wall Street etc. movement obviously is not all about the economy. And the economy is surely not all that life is about. However if such a popular movement goes up against the capitalist system it has to first of all clearly state its economic priorities.  / Trond Øverland

Other material on Currents: