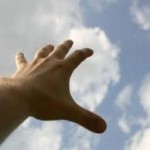 But in the realm of spirituality there is no limit at all. The spiritual strength that a person can acquire is not only immeasurable, but also infinite.