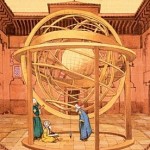 Dr. Sohail Inayatullah
At a recent OIC/Comstech (Standing Committee on Science and Technology) meeting in Islamabad, Pakistan on Science in the Islamic Polity in the next century, speakers delivered tirades against the West – while standing on a podium with the words “Best Western” (referring to Best Western Motels) boldly present.

Amidst all the calls for transformation, even by individuals who had been at the helm of the scientific establishment for the last twenty years, it was clear that science in Muslim nations, particularly Pakistan, had taken many wrong turns. Even the correct turns had turned out disastrously because of policy commitments towards Big Science. While nations like Malaysia focused on products that had commercial gain or ensured the reduction of the power of the feudal class, most Muslim nations remain committed to wars, both imaginary and real, with neighbours.

Instead of developing commercial science or local science that could meet basic needs and create better health conditions for women and children, nuclear strategies and Big Science were paramount. The costs for Muslim nations are now quite evident – a terrifying low literacy rate, low numbers of graduates and high malnutrition, to mention a few obvious indicators. The effects of colonialism, external and internal, seem to remain, as do pre-Islamic dynastic battles.

In the midst of the utter failure of Big Science and Western science, there have been calls for Islamic science. Islamic science was originally meant to unleash creativity, to recover the traditional categories of tawheed (unity), ilm (knowledge) and khalifa (humans as trustees) of a science based on an alternative worldview, one that was not modernist in orientation, ie., framed around the values of the nation-state, reductionism, methodological individualism, materialism, and military expansionism.

However, Islamic science in Pakistan during the political terror of the 1980s came to mean science focused on legitimating itself through the categories of the Islamic ontological position. Thus, it was argued that relativity theory and big bang theory all had their roots in the Quran. This fusing of the eternal with the temporal is problematic for numerous reasons.

First, science is based on changing boundaries of knowledge. If evidence changes as it did from the Newtonian to the Quantum worldview, what then of the Quran?

In addition, the attempt at fusion wrongly concludes that knowledge should branch out of the Quran, not conclude in the Quran. Focused on ilm, the Islamic world view is an invitation to thought and reflection, but not when it is based on dying or dead modernist categories from nationalism. The fusion of Islamic ontology with Islamic science led to attempts to mathematize the inspirational, the sublime, leading to bad science and bad religion.

This is not to say that the Quran does not give clues of an alternative worldview more balanced in its ontology, one where reality, for example, might consist simultaneously of material and non-material factors.

The conference eventually did move forward, even if reviewers damned it without attending it or reviewing Conference papers. In addition to developing a critique of Western science and not acceding to an entirely cultural definition of Islamic science, the conference touched upon the politics of policy-making. Science was not seen merely as a desire to know, but as a system of thought. And it was seen as an enterprise, one where individual scientists have little control over the larger process of what they discover, do, and how they do it. In this sense, science is cultural and civilisational. A non-Western science, like a non-Western theory of development, would be less committed to the alliance between capital, nation and science and imagine instead a science that empowered individuals and solved local problems even as it tried to become universal.

Unfortunately, not enough was said about practical examples of an alternative science. Instead the critique of the West was done not only against the backdrop of “Best Western” but against the history of Muslim glories. One participant even argued that science can be done only by believers, with non-Muslims unable to conduct true science.

Fortunately for most, Islam was a moral space, a pluralistic and tolerant one that provided a defense against modernity. But this moral space is constantly under threat as instrumental rationality leads to Muslim money going not for Third World local development but to speculative markets. It is this form of rationality that does not allow for the creation of a true community.

The West has thus become ubiquitous; Muslims have internalized it, even going so far as to assume that science is value-free, acultural and apolitical. Revivalist or fundamentalist Islam thus is not a creative response to this modernist self but a reaction that merely reinforces the values of the West. The endeavour for true Islamic science, in contrast, would ask whether a different science can be created, with different research questions and different ways of working together. Islamic science, like Western science, however, would claim to be universal, with results repeatable.

While delegates debated the positions of Islamic science, Western science, Islamic ontology and the world political economy which frames who gets what, recent technologies promise to transform the ground of this debate.

For example, genetic engineering threatens to soon transform the private space of our individual genes to public space, where they can be bought and sold. Not only will plants and other resources be patented by the technologically advanced – so will our very selves.

Not only will the natural be under threat, the conventional view of Reality – considered stable for centuries – is being undermined as well. Virtual reality, epistemological deconstruction and cultural melange all challenge the view that there is an essential or permanent reality.

Computer developments will soon make it difficult to discern what is created and what is natural. The view of the world of Man as the centre of all things is equally contentious, with challenges from feminist and other perspectives that remind us that plants, animals and robots (technologies) have equal demand on our conceptual space.

Finally, sovereignty has become riddled with holes, and God, nation, and self all appear far more undefined than they have for centuries. Though how these transformations will play themselves out cannot be predicted, they do promise a postmodern world in which we will all be strangers. For Muslims and others committed to spiritual perspectives of reality and others who live and work on the margins of industrialism and neo-realism – the social movements, the indigenous peoples – the world is already, however, unfamiliar.

The post-decolonisation project has been to transform Western reality, or at least to create spaces of familiarity and recover historical categories silenced by modernization. This conflicts with national projects, which have been more focused on industrialising within the context of Western liberalism or socialism. In practice, Islamic science and elites continue to be guided by models of reality that promise more, larger, and grander – all at the expense of the cooperative, the communal and the local. Nor do we creatively appropriate foreign-origin new visions of science.

Islamic science, or non-Western science in general is about creating new universal and inclusive models. They are committed to ethical spaces and action in a world where difference is far more captivating than similarity. However, to survive – for postmodernism does not sufficiently challenge unequal power relations and center-periphery distinctions – an agreed global ethic must be posited.

Once the natural, the real, the human, and the sovereign have been made relative, what will the new guiding ethic be? Islamic science and other non-Western projects lay claim to this future, arguing that colonisation has allowed them to creatively internalize the West and thus create a critical traditionalism that can move the planet forward.

The conference began debate of these issues, and concluded by discussion of a specific science policy in Muslim nations. Clearly a transformation in science policy at the very top would be ideal, and include a commitment to science and technology, basic education, and literacy. Specifically this would mean scholarships, creating science cities (suggested by Anwar Nasim of the Pakistan Academy of Sciences) and targeting areas that Pakistan could excel in. This would not be the nuclear war program but would be solar and focus on softer energies systems wherein an Islamic science could flourish.

An Islamic science would also create a science consciousness – a mentality of inquiry, the search for knowledge (spiritual and physical) and using tradition to create a new future, not one that transfers the past to the present.

But this level of grandness is unlikely. Muslim nations remain in various vicious cycles of feudalism, anti-Indianism, and politics-as-staying-in-power rather than social responsiveness. Western science has fit perfectly into that paradigm. Still, finding ways for scientists to work together, increasing funding, initiating pilot projects, and other steps are all important. As Foucault reminded us, power is everywhere, even at small levels, and minor changes during periods of crisis can lead to massive transformations. As complexity and chaos theory asserts, we live in a world of many interactions and numerous loops, and by the appropriate pressure on some of these points a great deal is possible.

But merely calling for more of this or that will not do. Bureaucracies continue because they ossify languages that succeed, ensuring policies that fail. We might not have a solution to the angst of shrinking moral space, but certainly an alternative science and model of development cannot be any worse than the tragedy of the last few hundred years.

Other material on Islam: