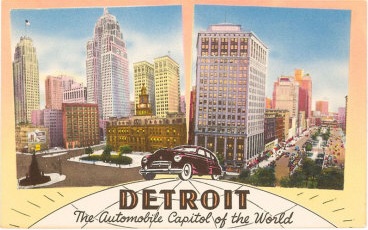 (May 2011) – Things are changing in the land of big cars and small gas prices. US families now spend more on gasoline than they spend on cars, clothes or recreation. For every $10 the typical household earns before taxes, almost a full dollar goes toward gas. 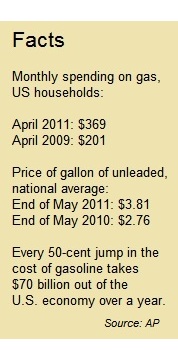 As a consequence, day trippers, millions of them, prefer to have snacks in gas station parking lots rather than buying lunch and enjoying life on the town. Rising fuel prices have just eaten too much into their budget, AP reports.

You may wonder why this favourite variety of the American pursuit of happiness ended up stranded on the highway, rather than pursuing a more balanced economy that would not make all other services and productions hostage to a gargantuan American oil industry. The answer to this simple question is that Americans have always been conditioned to preferring oil over other pleasures. While the rest of the modern world have thrown out the old petro fairy tale long ago, the oil-greased spirit of US industrial and economic history has proven remarkably resistant to such needed reform.

The commodity of oil and the concept of personal freedom is entwined in the US. From the early oil findings in Texas, California and Pennsylvania, through Henry Ford and the Detroit car manufacturing heaven, and all the way to combating in Iraq and Afghanistan, trickles a river of the shiny black substance that came to fuel the essence of the American dream. America became the New World of unlimited individual opportunities and the gasoline-driven auto-mobile became a chief symbol of their new-found personal freedom.

These days however something is unhinged in God’s Own Country, which is now also the world’s most debt-ridden country. Its inhabitants continue to live beyond their means in a very big way and personal and national insolvency keeps mounting.

How is that possible, you may ask. Surely banks have lending limits? Nope, not in the US they don’t. And whenever the US needs money for shopping abroad — in its continued pursuit of happiness — it just prints the money it requires to make up the deficit, currently about 3 billion dollars per day.

Current affairs analyst Susmit Kumar has commented that capitalism is already dead in the US and has been “unsuccessful” there. If someone ends up needing $3 billion a day to keep it up then it cannot be termed a successful business, Kumar points out.

The theme of the US-led post-WW2 era has been exploitation of resources at home and abroad. Mind you, not utilisation but exploitation. And when exploitation no longer seemed to work, the US authorities moved to print dollar notes much beyond any sort of rational economic thinking in order to sustain national spending power.

This madcap policy, introduced by the Nixon administration 40 years ago, has lately been adopted by many other failing economies as well. Today it is known as quantitative easing (QE), propagated as a necessary measure to kick-start the failing economy. Throughout this period of late western capitalism — globalisation — the oil myth has been carried forth by the US as the mother of all holy cows, without which, it may be argued, the weapons of mass destruction myth and the invasion of Iraq would not have been possible or even required.

At present the world keeps its breath (and some smart-asses are probably offering stock exchange futures on it) as to when China will scrap the trillions of US dollars it owns and decide on a new standard. As a matter of fact the moment of truth arrived on April 14 with a radical BRICS currency statement. However all parties involved have for reasons best known to them preferred to behave as if it really did not occur, for just a little while more, we take it.

When the dollar will be finally and totally devalued, we will all learn what a global tsunami and earthquake really may mean in our lives. Authorities everywhere would probably do their peoples great service if they’d scrap quantitative easing now. But they will not listen to such sound advise and the damage will continue to accumulate for some time more due to their erroneous policies.

The place to start really would be to close down stock exchanges and instead invest in cooperative banking. Perhaps the single most economic issue we are faced with today is to bring finance back to where it belongs – to people and their localities. Financial institutions should serve local and regional growth and the control of those institutions should be with the local people.

The story of how America’s pursuit of happiness lost out to oil is that of a fairy tale turned horror story. There is nothing wrong with crude oil or any other resources for that matter. If anything, there has been something wrong in some people’s thinking. There is no wisdom in trying to establish an empire or one’s personal life on opportunism alone.