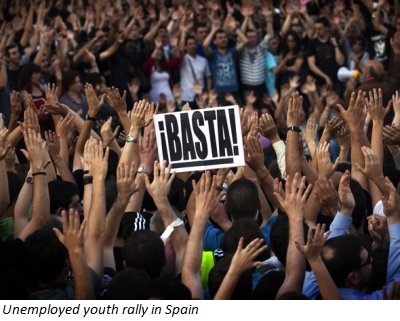 By Trond Overland
A worsening of the crisis of capitalism will cause unemployment figures to rise sharply globally. There are numerous reasons for the establishment to be concerned.

Among other things, high unemployment causes social unrest. One in four young adults in the Middle East and North Africa are jobless, a factor that contributed significantly to the dynamics of the Arab Spring.

At present around one in four youth are unemployed in the EU. As per mid-February 2012, Spain’s jobless rate for people aged 16 to 24 was approaching 50 percent. Greece’s was 48 percent, and Portugal’s and Italy’s, 30 percent, the New York Times reported.

“It does not help the unemployed of California that Apple is the world’s most profitable company when its pods, pads and phones are being produced in China.”

In the UK, young people aged 16 to 24 account for about 40% of all unemployed, which means almost 1 million young adults were jobless. Half of the UK’s young black men are unemployed, a figure that has doubled in three years and is now double of that for white counterparts, The Guardian reported. Experts say that the majority of those who took to the streets in London last summer were young people who were unemployed, out of school and not participating in a job training program, the NYT wrote.

A Eurofound report [pdf] shows that youth without education, employment or training cost the EU €2 billion per week, 1% of its aggregate GDP, and that “youth unemployment and its accompanying risk of social exclusion and alienation is a real issue in many member states”.

Among Latin America youths a lost generation is emerging as unemployment soars; nearly 20 percent are neither studying nor looking for jobs, the Christian Science Monitor reports. In 2011, about 75 million youth were unemployed globally. Young people are nearly three times as likely as adults to be unemployed, the International Labour Organisation (ILO) states in its 2011 annual report.

According to ILO’s 2011 forecasting report, global rates of open unemployment, which had been falling from their peaks of early 2009, started rising again in December 2010 for developed countries and by the middle of 2011 for developing countries as a group. A September 2011 report from the G20 found that in the first quarter of 2011, only a handful of countries had employment levels above those of the first quarter of 2008, before the global crisis erupted, Gosh observes.

One in ten earthlings are currently unemployed, says the CIA World Factbook. A great many others are let down severely although they may have some employment: One in five workers in the world (630 million workers) lived with their families at the extreme US$ 1.25 a day level in 2009.

It is therefore not surprising that numerous proposals on how to tackle unemployment continue to come from governments, research institutions, unions, etc.

Perhaps Indian economist Jayati Ghosh comes nearer to a realistic alternative with her vision of “moving away from the profit- and export-driven growth model to a wage- and employment-led growth model, in which improvements in quality of life of all are seen as the basic goals.”

“Economists,” writes American conservative economist Paul Craig Roberts, “have no known way of explaining how an economy, in which millions of manufacturing and professional service jobs have been offshored, can compensate for the lost American incomes and purchasing power. The profits from offshoring flow to a narrow segment of the population consisting of corporate management, shareholders, and Wall Street.

“These income flows cannot replace the millions of lost incomes and careers of those whose jobs have disappeared. There is a limit on the ability of the mega-rich to buy and to consume. The consumption of a few people cannot drive an economy. This is why the concentration of income and wealth in a few hands kills an economy.”

Once jobs are gone they don’t come back

Unemployment in developed countries has thus remained high, and in some cases increased, even when economic figures indicate “recovery”. The reason for such incongruity may be called the “Apple syndrome”: People who have lost their jobs due to outsourcing are in no position to maintain their previous spending levels, irrespective of the colossal profits accumulated by transnational companies based in their area. It does not help the unemployed of California that Apple Inc. may be the world’s most profitable company when its pods, pads and phones are being produced in China.

Once jobs are outsourced, that’s it. Proutist thinker Dr. Susmit Kumar writes: “Capitalism is for maximizing the profit. Therefore Wall Street, which caused the manufacturing and service jobs to shift offshore, will never allow these jobs to return.” The immediate negative effect of outsourcing is that local purchasing power is hurt before a long line of social and other problems sets in.